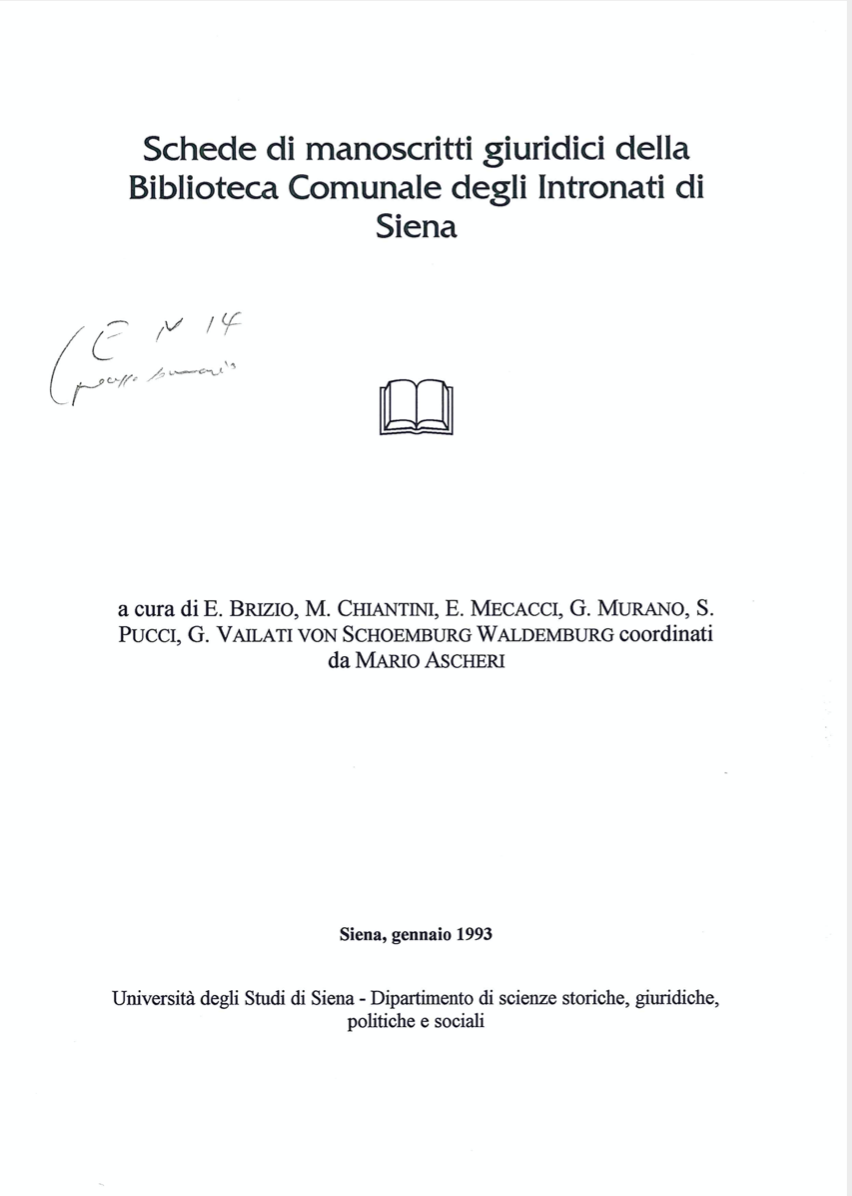 To consult the pdf of the catalog, click on the image of the cover

“The core part of this project consists in digitizing and classifying the vast collection of legal and theologico-philosophical codices making up the rare-books collection of the Reale Collegio di Spagna in Bologna: with this digital catalogue, built under the guidance of Professors Domenico Maffei and Andrea Padovani, not only can the fragile codices be readily accessed and studied, but their preservation for future use is guaranteed, too. The project -named for the primus illuminator of Bolognan legal science, the Italian jurist Irnerius – would not have been possible had the Collegio di Spagna not made its rare-books collection available. Funding for the project comes from the Fondazione Cassa di Risparmio in Bologna, and also from the Italian Ministry of Higher Education and Scientific Research. The digital images have been reproduced under the editorship of the publishing house CLUEB.” 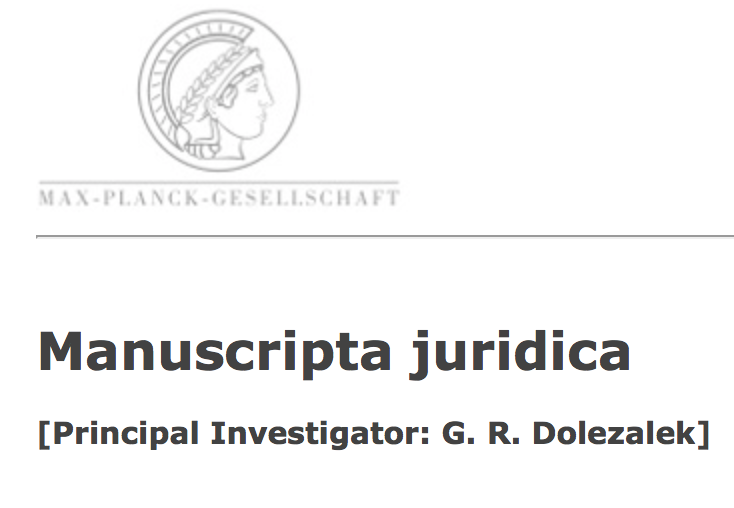 Manuscripta Juridica is by far the oldest electronic collection of data about manuscripts. It was established in 1972 on a main frame computer of the Max-Planck-Society, for its Institute of European Legal Historz, long before personal desk computers and laptop computers were invented. In its origin, the collection bore the name “Verzeichnis der Handschriften zum römischen Recht bis 1600”. In 2012 the Max-Planck-Institute for European Legal History finally uploaded this data collection on the internet – in a meanwhile widely enlarged and restructured version. At present, “Manuscripta Juridica” contains data of more than 33.000 items of handwritten legal literature, preserved in more than 11.000 manuscripts, which are held in more than 1000 locations. The data base mainly exploits legal-historical literature. It registers information gathered by legal historians about contents of manuscripts which comprise juridical items. In Manuscripta Juridica, illustrations are usually passed over without mentioning: namely illustrations lay outside the scope of this data base. Nevertheless, in cases where “Manuscripta Juridica” furnishes particularly detailed descriptions of manuscripts, also some illustrations may be mentioned – however just shortly, en passant. For the scope of this international congress, the undersigned intends to upload onto the internet a list of those items in Manuscripta Juridica which actually do mention illustrations.

The collection is divided into several sections:

Classics of Common Law (12th-18th centuries): 874 works published so far, including 279 incunabula
Medieval legal manuscripts: 1,712 manuscripts from 198 libraries available so far. The activity will continue until the digitization of the entire collection which includes over 3,500 manuscripts and which represents the most complete collection existing in Europe of microfilms of medieval and early modern legal manuscripts (Germanic laws, Roman law, canon law, laws and doctrines of common law from the glossators to the cultural school and beyond)
Italian statutes: 306 statutes available so far that will reach over 3,000 by 2018, which make up the collection of the Institute of the History of Medieval and Modern Law of the University of Milan. 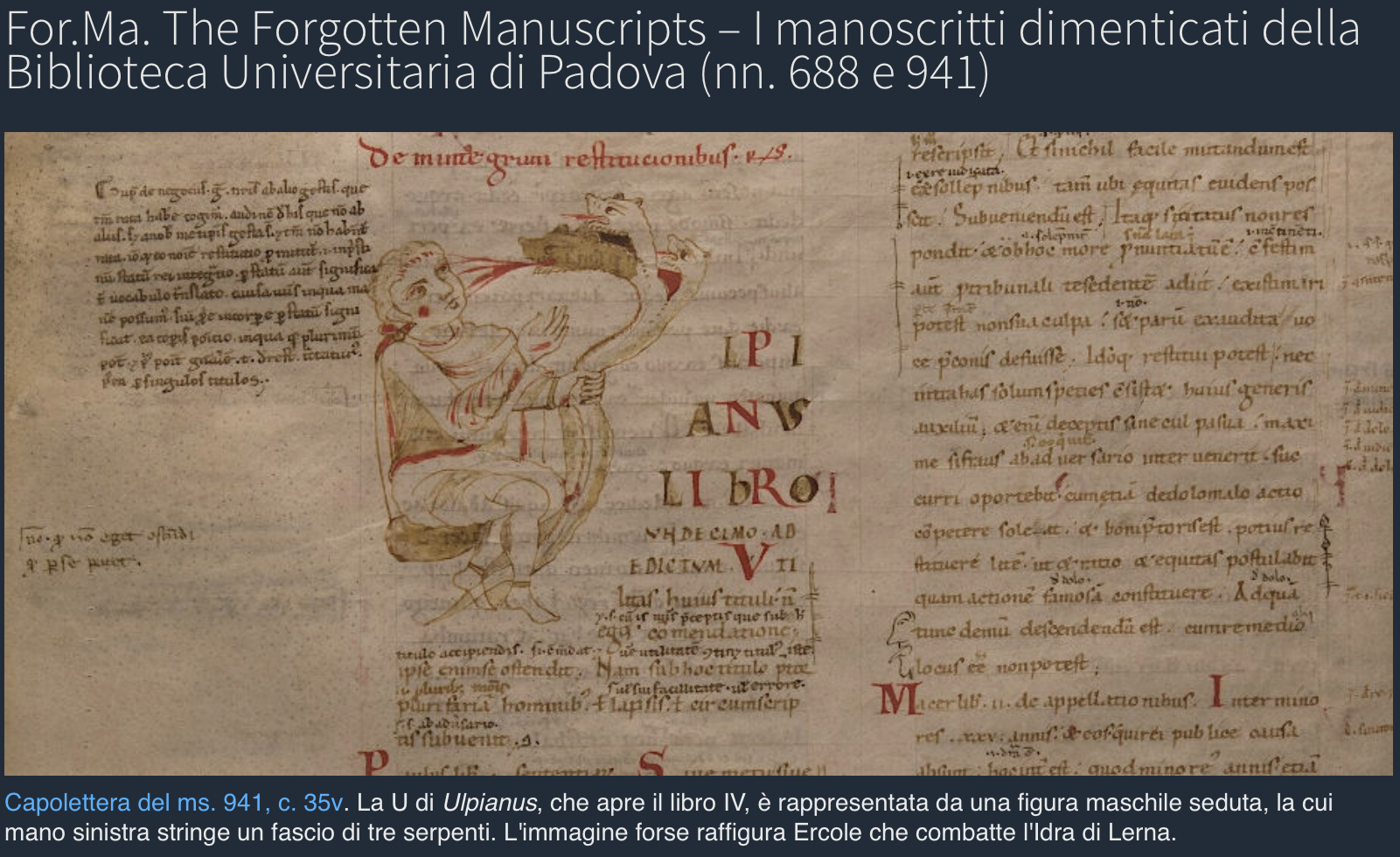 ‘Form.Ma – The Forgotten Manuscripts ‘is a research project initiated by the Department of Private Law and Critique of Law of the University of Padua thanks to the financial support of the Cassa di Risparmio di Padova and Rovigo Foundation, which awarded it among the’ Projects of Excellence 2017 ‘. The project aimed to study and enhance two precious and almost forgotten manuscripts of the 12th century preserved in the University Library of Padua, which contain some parts of the Corpus Iuris Civilis, the monumental collection of Roman legal texts created by Justinian in the 6th century AD.

Le Miroir des classiques – Repertory of translations of Latin and Greek classics made in French and Occitan during the Middle Ages [Principal Investigator: F. Duval]

“The Mirror of the Classics is a repertory of translations of Latin and Greek classics made in French and Occitan during the Middle Ages. Under the title of each translated work, the various translations are presented in their chronological order as well as their possible changes. For each translation, characterized quickly, is provided a precise analysis of the manuscripts and editions (incunabula and editions of the sixteenth century) that keep it. The Gallo-Roman translations of Corpus Juris civilis, largely unknown, have been the subject of particularly detailed treatment and constitute a largely autonomous sub-corpus“

This site is curated by David M. Freidenreich, Colby College; many of the scans found on this site were prepared by Edward Reno III, Columbia University.

The purpose of this site is to bring together in a single virtual location publicly accessible electronic resources for the study of medieval canon law. It’s a work in progress 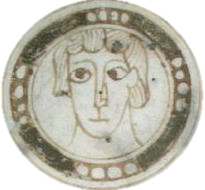